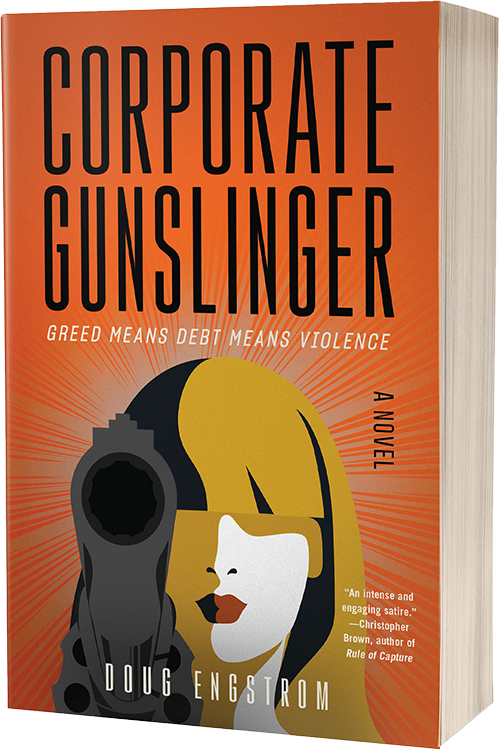 "A relentless commentary on the human cost of debt culture, Corporate Gunslinger is the kind of honest, page-turning dystopia we need now more than ever." --Darin Bradley, author of Noise

"Corporate Gunslinger takes all the niggling fears of being young and in debt in capitalist America and turns them into a brilliant, bloody nightmare of a science fictional thriller." — Rachael K. Jones, World Fantasy Award Nominee

"An intense and engaging satire of contemporary American life that reads like a Richard Morgan version of The Hunger Games, telling the story of indentured young trainees being groomed for violent tournament spectacle—and exploring the compromises we all make to survive in the arena of 'real life.’" — Christopher Brown, Campbell and World Fantasy Award-nominated author of Tropic of Kansas and Rule of Capture

Like many Americans in the middle of the 21st century, aspiring actress Kira Clark is in debt. She financed her drama education with loans secured by a “lifetime services contract.” If she defaults, her creditors will control every aspect of her life. Behind on her payments and facing foreclosure, Kira reluctantly accepts a large signing bonus to become a corporate gunfighter for TKC Insurance. After a year of training, she will take her place on the dueling fields that have become the final, lethal stop in the American legal system.

Putting her MFA in acting to work, Kira takes on the persona of a cold, intimidating gunslinger known as “Death’s Angel.” But just as she becomes the most feared gunfighter in TKC’s stable, she’s severely wounded during a duel on live video, shattering her aura of invincibility. A series of devastating setbacks follow, forcing Kira to face the truth about her life and what she’s become.

When the opportunity to fight another professional for a huge purse arises, Kira sees it as a chance to buy a new life . . . or die trying.

Structured around a chilling duel, Corporate Gunslinger is a modern satire that forces us to confront the growing inequalities in our society and our penchant for guns and bloodshed, as well as offering a visceral look at where we may be heading―far sooner than we know.